Empty Yourself of All Independence 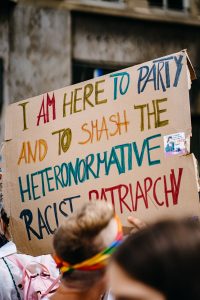 V2 …being of the same mind, having the same love, being in full accord and of one mind…

Throughout my time in public school I was taught to think independently. Always non-conformity was the goal in the various different writing and reading assignments that we had. On the other hand uniformity of thinking was seen as bad, and if you were found simply thinking like somebody else thought you were considered just a sheep following the crowd. As I think back to this time, I reflect on how much of the motivation was an appeal to pride, to stand out, to stick out above the crowd, to have a novel idea. Of course there is a certain kind of conformity of thinking that we should avoid, namely that of thinking a certain way because another man thinks that way. And yet the push for independence of thinking seems like a clear over-compensation as well. Are we really to be forever thinking differently–kicking against all norms and never coming to any sort of a consensus or agreement upon which we can unify? Are we to be forever fragmented more and more until we live in a world in which we are the only ones with whom we can agree? Could it be true that the presupposition “always think independently” might actually be just as conforming of an idea as that of uniformity and leave us just as sheepish? It has been said of the hipster movement of the early 2000s that hipsters are a group of young people all screaming together with one voice “non-conformity!” Is that our only option?

In the passage above we are exhorted to have a unified mind or way of thinking. We are to have “the same mind” or “one mind” (2b).  Postmoderns kick against this idea due to a sense of its limitation. It would be easy for some to think God is stripping them of their independence by forcing them into a conformity of thinking, just simply making them a bunch of sheep again. The fact is, however, that we are sheep, we are not wise enough to pave our own way, and we were never created to. The sheep of the world can either follow other sheep into a pit (worldly uniformity), or scatter with the rest of the sheep that are scattering (another kind of worldly uniformity). Either way we conform and lose.

This passage gives us the answer to the conundrum of uniformity and independence by centering us on the only possible principle of uniformity–Christ. The condition of having one mind (V2) is this, that we have begun to experience the joys of Christ (V1). If we have begun to experience the joys of knowing Christ, then we are truly free to allow ourselves to be brought into a uniformity of thought with others. Why? Because of the false appeal to pride behind our desire to think independently is gone. We are no longer trying to stick out or be independent for the sake of the attention, because to think like Christ is to think completely un-ambitiously (V3). Independent thinking is no longer the goal, but rather Christ-like thinking (V5). Our concern is no longer our interest but that of others (V4). We are no longer trying to boast in that which is unique about ourselves, but rather we are emptying ourselves of all are so-called novelty and uniqueness (V7). This is called humility, and there is great freedom in humility.

One might respond, “if we allow ourselves to go down this road, then what happens to our freedom and independence?” The resistance to the idea of conforming to another’s way of thinking is that we feel we might lose our identity. The truth, however, is that our identity is established. As we follow the road that Christ took, we see that it was because of this very humility that God exalted him and gave him a NAME that is above every other name (V9). It was precisely because Jesus chose not to grasp at what was truly significant about himself in independence, his identity became established by God. How much more should we, who only have a perceived significance or independent way of thinking, release our grasp on it–relishing in the joys of knowing and bowing to Christ. Our identity too will be established in Him, even while our thinking is brought into conformity with that of our brothers.

About the Author: Matthew Carver